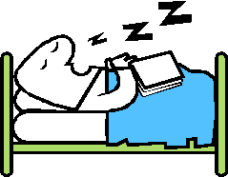 Many years ago, I watched a movie with my dad. It was The Big Sleep, starring Humphrey Bogart.

Now I am about to star in my own version of The Big Sleep. Well, kind of.

I am taking part in a sleep study. This is because I am given to snoring at times. Well, so my wife tells me. And tells me, and tells me.

Often I am tempted to say: “Shhhhhhhhhhhhh! Enough already!”

Instead it comes out: “Zzzzzzzzzzzzz.” I nod off easily at times, you see.

But snoring isn’t the biggest of my problems.

My wife suspects I have ceased breathing on two or three occasions in the dead of night. Now there’s an expression for you – the dead of night. I would argue this point with her but can’t, really. How am I to know with certainty I did not experience interrupted breathing (sleep apnea) – I am asleep when this allegedly happens! Dead to the world, as a well known Zzzzzzzzz-saying goes.

So in April, I will be an overnight guest at a  snoring and sleep centre. I’d heard of the place before but to tell the truth, never dreamed I’d be going there, not ever. Someone who has been through it already tells me not to worry: “Don’t lose any sleep over it,” he said Wednesday with a chuckle.

My participation is the result of meeting with a doctor. There, I answered (with my wife’s input at times) a probing three-page questionnaire and answered even more questions during verbal interviews – first with the doctor’s assistant, then the doctor himself.

Some of the questions I didn’t even answer, my wife spoke on my behalf.

Question: “Do you find yourself falling asleep during the day?”

Wife’s answer: “Oh, he falls asleep sitting upright while watching TV. He falls asleep in the car when we go out for a drive. He’s fallen asleep lying on the floor watching TV while we’ve had friends over. He goes to bed and wants to read for a half hour but he’s asleep in five minutes.”

Question: “How long has this been going on?”

Wife’s answer: “Oh, some of this has been going on for years.”

These signs and others are indicators of having a sleep disorder, from what I understand.

There’s written proof too: When my scores were tallied (based on the responses I/we had given), they were on the high side of the scale indicating that I do have sleep issues, said the doctor’s affable assistant.

Now I am in rehearsal for my role in The Big Sleep, following directions as given so I play the part well.

I already have one key line from the script committed to memory: “You must provide at least 48 hours notice of cancellation or you will be billed $350.”

Wow, talk about a rude awakening.

I can see myself losing sleep over that.

(A former reporter and city editor, Joe Barkovich lives in his hometown of Welland, Ontario. It’s My Life, Sort Of appears periodically on the blog)