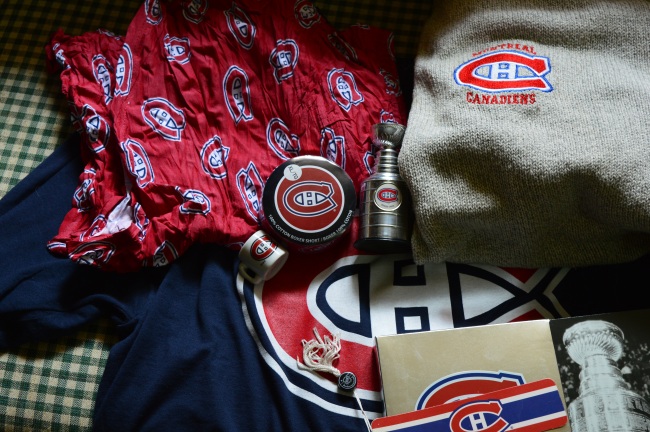 CAPTION: My good luck charms will be kept close in Game 3. (Photo by Joe Barkovich)

Ok, so your team is down two games to none.

Ok, so they dropped the first two games on “home ice” as it is known.

Ok, so their star goalie, Carey Price, is out for the series with the New York Rangers, according to published reports.

Ok, so it could very well turn out to be out for the season, barring a dramatic turnaround.

Worried? What, me worry?

The team is in dire straits. That’s dire straits, as in the Big Apple. As in the casa of the so-called Broadway Blue Shirts.

How could this be? Down two games to none?

Not that I’m superstitious mind you, but I think it could be time to break out the good luck charms and keep them nearby.

Like my Habs t-shirt which stays on ‘til the series is over, fini, one way or the other.

Like my knitted Habs sweater, grey, trimmed in red, with the logo over your heart, which is where it should be.

Like my Habs boxer shorts. The krinkly-looking item (in the photo) is the shorts the way they look when unpacked from the object on top, the one that looks something like a puck. One thing about Habs boxer shorts: you never wear them. You just look at them, over and over every once in a while. A t-shirt or sweater are meant to be worn. But not the boxer shorts. Sacrilege!

Like my Habs thimble-size mug and my Habs book marker and my Habs 100 Years of Glory, four-disc collection of the team’s storied history.

Like my Habs replica Stanley Cup. I remember when it graced the top of the city desk at work from the start of hockey season to the game when the Habs were eliminated from playoff contention or playoff play.

Or my Habs 12 jumbo crayons set. (not pictured). The box says for 3+ but that’s a mistake. I know kids whose dads had them in Habs school from the time they were born!

Time to break out this good luck arsenal.

Time to have these good luck charms, and others, ready for Game 3.

Then I heard the voice of Dan Girardi, the Welland kid who plays for the Rangers say: “Ha, ha, I’ll be back in the Rose City soon enough, hoisting the Stanley Cup, just wait and see!”

It turned out to be a nightmare, Girardi handing me a nicely wrapped sandwich before he skated down Broadway and out of sight.

What? Me worried? Superstitious? Who me?.