A thin film of ice is atop watery trails in Woodlawn Park, trails that may soon become ribbons of ice threading their way through the woodland for hockey players and figure skaters, it’s hoped. Until then, leaves trapped beneath the ice and limbs reflected on the surface combine to make an art form that I’ve come to call Ice Art. (Photos by Joe Barkovich) 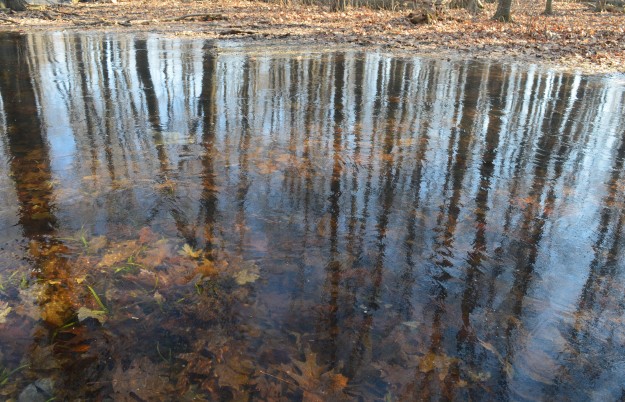 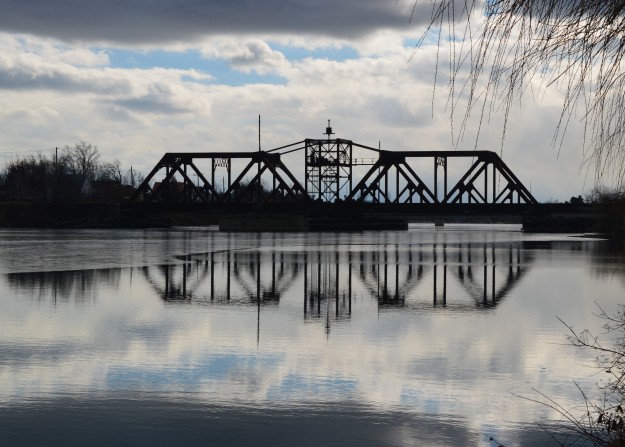 Don’t be misled by the eye appeal of this scene. The old railway bridge in Welland is an eyesore and potential safety hazard. Something needs to be done with it in 2015. (Photo by Joe Barkovich)

Will Welland city council cross this bridge issue if it comes to it in 2015?

I also hope the word ‘if’ can be replaced with the word ‘when’.

This bridge is an eye sore, an embarrassment to Welland and a potential safety threat. I’ve said it before and I’ll go on saying it until someone shows interest in listening.

I’m looking for leadership from someone on this council in turning this into a matter of public interest and concern in 2015.

If it takes a public meeting – not a behind closed doors meeting – involving the city; the bridge owner, CP Rail; the MPP, the MP, the Region and any other interested parties, then let’s have one. I’ll go so far as to challenge Welland’s mayor and 12 councillors to hold an on-site viewing of this bridge just so they get to see it with their own eyes, if they have not recently done so. While there, they can also check out the pilings in the waterway to see what potential danger they pose. And then I’d like them to open up to the media about what they think.

This stretch of recreational waterway and environs is slowly but surely turning into a green space that is the envy of many who visit our community. But this bridge is a blight on what is unfolding in our midst.

Something needs to be done about it. That’s My View.

(A former reporter and city editor, Joe Barkovich lives in his hometown of Welland, Ontario, Canada’s Rose City. My View is a recurring feature.)

Canada geese parade along the Welland Recreational Waterway Tuesday afternoon in front of a handful of admiring onlookers. One minute to post time! (Photo by Joe Barkovich) 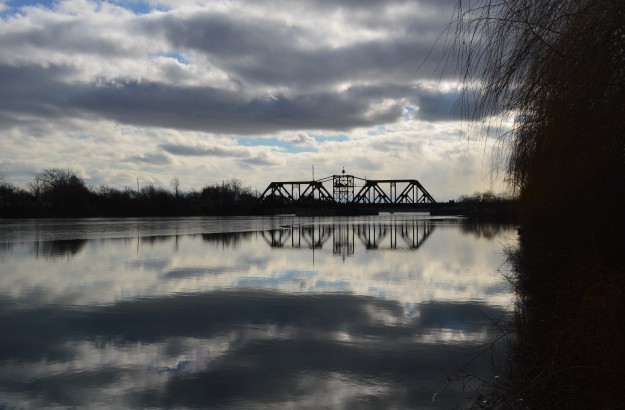 The old train bridge, a reflection of which can be seen in the Welland Recreational Waterway, makes a forlorn sight on a cold and partly overcast Tuesday afternoon. (Photo by Joe Barkovich)

Deserted for now, this bench in a pretty spot amongst trees along the Welland Recreational Waterway isn’t the hot seat it is in warm weather months, when it’s a popular perch for readers and sun seekers. (Photo by Joe Barkovich) 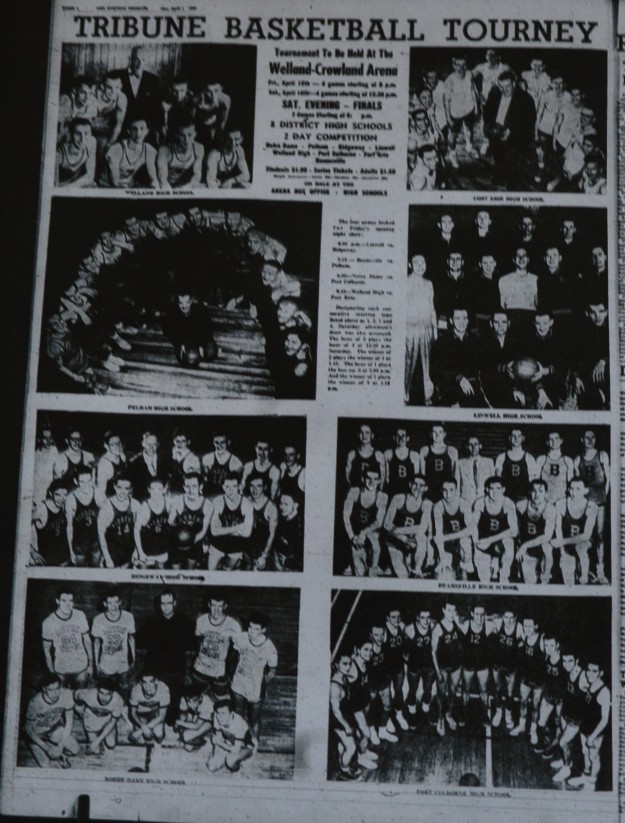 The inaugural Tribune Basketball Tournament was big news in Welland back in April, 1955.

It was played Friday, April 15 and Saturday, April 16 in the Welland-Crowland Arena on King Street.

The tournament was accorded good advance coverage by the newspaper. An entire page was devoted to eight team photos, with info about the tournament, ticket prices, venues and schedule of opening games filling in the white space.

An image of the full-page advance coverage appears above this story. The teams in the photo are, clockwise from top left, Welland High, Fort Erie, Linwell High, Beamsville, Port Colborne, Notre Dame, Ridgeway and Pelham.

The 60th anniversary tournament is being held in January: Wednesday, Jan. 7 through Saturday, Jan. 10, 2015.The tournament is sponsored by Niagara College. 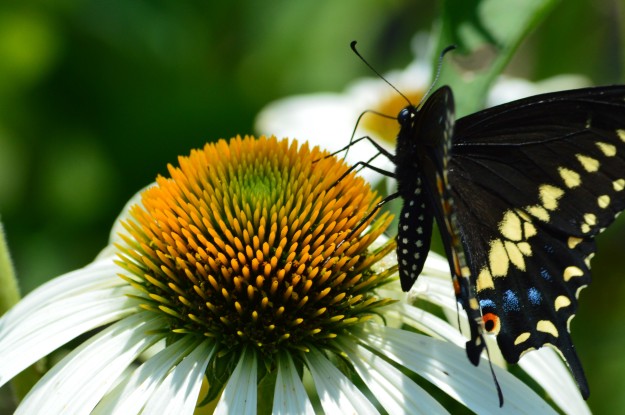 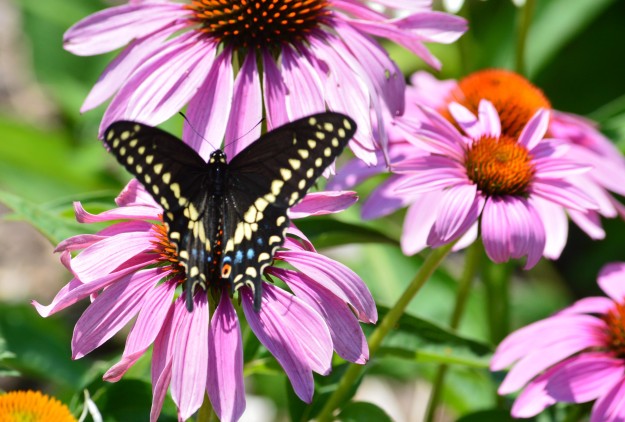 One of several discoveries during 2014: the butterfly gardens on the Niagara College Welland campus.

I’d seen the wildflower beds while walking with my dog, but from afar didn’t recognize them for what they really are.

It took a moment’s curiosity one July morning.

A wildflower bed was being visited by a dozen or so butterflies. They touched down gently, nosed around for nectar the flowers may have had to offer, then fluttered off to nearby others that caught their eye.

When I returned in the afternoon, the dog stayed home and the camera came with me. One afternoon I spent almost three hours in the gardens watching the butterflies and taking photographs.

The best butterfly garden is found along a stretch of Woodlawn Road, down a ways from the First Avenue intersection and the big berm. You can see it from the road while driving by.

Not many people realize the butterfly gardens are on campus, judging by the lack of visitors over the course of last summer.

Signs have been erected explaining what they are, they’re well worth reading if you visit.

When you do, be sure to bring your munchkins, and your cameras!

While there, you will also probably see bees in the butterfly gardens too. Don’t tell them to buzz off!  The bees are a bonus attraction. 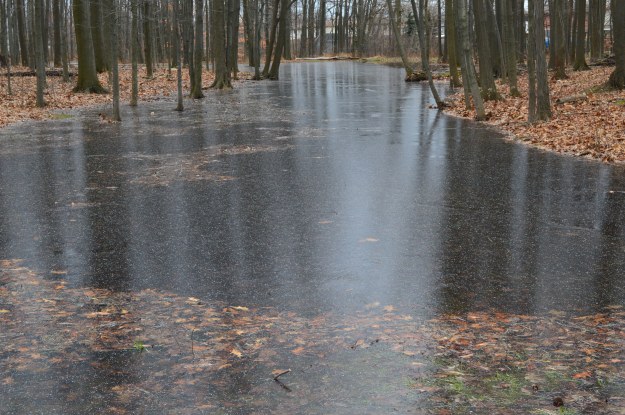 Earlier today, two kids with skates in hand stopped at Woodlawn Park hoping to find ice suitable for skating but alas, such is not the case. It looks inviting but there’s more work to be done. Also, early Sunday evening, around 5, the neighbourhood rink on Gram Avenue was being flooded, in preparation for colder weather on the way. It too is in need of more work. Sooner or later (they hope!) local youngsters will be on the ice with sticks in hand and blades of steel on their feet. (Photo by Joe Barkovich)