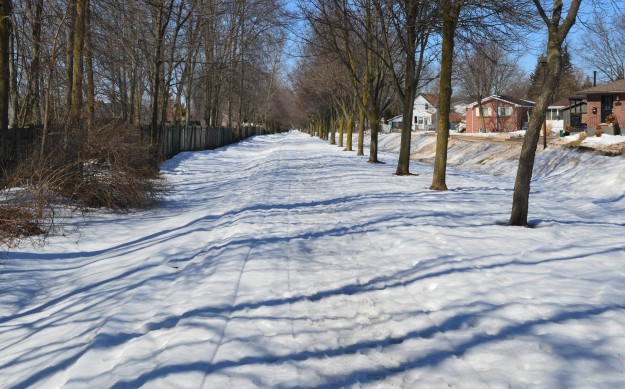 Where the N.S.&T. line passed through. (All photos by Joe Barkovich)

Welcome to Street Sense, where street names get the story they deserve

Had you previously heard about a neighbourhood called Electric Park subdivision? No? Well, chances are you know it better by another designation, Stop 19.

Good background is provided in Welland Historical Society’s nifty book, What’s In A Name, The Origins of The Street Names for the City of Welland. This book was launched May 7, 2005. While it doesn’t provide info about all street names in the city up to that time, it still is a good reference book for any home library.

Here’s the scoop it provides on Electric Park, as it was formally known, and some additional info from Welland historian William H. Lewis:

“This property owned by Donald Sharpe was developed in Thorold Township. It developed as a small thriving community known as Stop 19, since it was stop number 19 of the N. S. & T. Rail line which ran between St. Catharines and Port Colborne. Before being annexed by the City of Welland, it was completely self-sufficient. It had a school, churches, fire hall, stores and transportation to the city.

On Thursday, I walked a portion of the land through which the old rail line passed, it’s a walking trail these days. Starting from Thorold Road I walked about half the distance to where it meets Woodlawn Road. Though still snow covered, but soft and mushy in places, it was easy to walk. The sun was out, the sky was blue and bright, and the terrain was all mine, not another walker in sight.

At home, I turned to the book by Mr. Lewis for historical perspective. He gives railways a lot of ink in chapter 5 of Volume 2 of his trilogy about the city and its history.

Here’s what he has written, picking up in the year the Niagara, St. Catharines and Toronto rail company was extended south, to our neck of the woods:

“The company then began to extend their trackage south across the Niagara Peninsula, and by 1907, interurban streetcar service had progressed to Fonthill. On May 4, 1908 the tracks had reached the north side of the Welland River at present-day Colbeck Drive on a right-of-way beside what is now Prince Charles Drive. Five months later, the line was extended across the river on a wooden-pile trestle over 300 feet in length, and on August 2, 1911, reached its terminal at Elm and Kent streets in Port Colborne.

A number of residential neighbourhoods in today’s Welland became known by their locations on the N.S. & T. line. The Quaker Road crossing was Stop 17, and the area near the intersection of Thorold and Rice roads is still called Stop 19 by many old-timers in the city.

At Welland High School, an early bell was rung near the end of the day’s classes to excuse those students who had to catch the north-bound trolley.”

Here’s a statistic about the N. S. & T. that’s too good not to share with readers: According to Lewis, its largest movement of passengers in a single day was July 27, 1942 when an estimated 5,000 Atlas Steels employees, their families and friends, were transported to Lakeside Park in Port Dalhousie for the company’s annual picnic.

Well, the train, or trolley, stops here. Time to get on to street names and their backgrounds. Here are some found in the Stop 19 area. The info is excerpted from What’s In A Name:

Sharpe Avenue: Colonel Donald Sharpe was the owner of the property, and the Reeve of Thorold Township;

Hatter Avenue: Named for Herbert Lacy Hatter, who signed an affidavit of witness on the plan. Mr. Hatter was a stockbroker and a business acquaintance of Colonel Sharpe.

Unfortunately, neither book explains the name Electric Park subdivision; I’ve heard it ties in to the trolley line’s presence, but can’t be sure about this.

This looks like a nice part of town, from all appearances warm and welcoming, where your neighbours are also your friends.