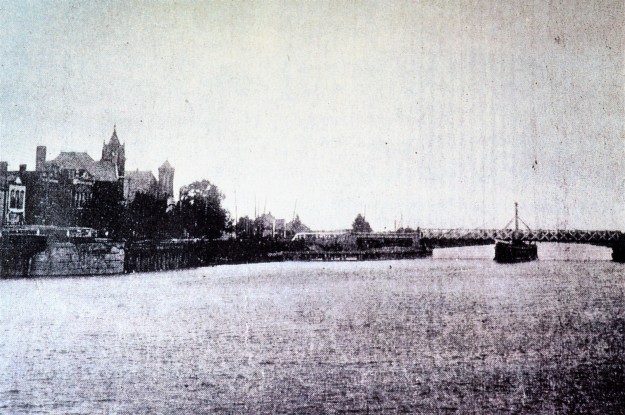 Pictured in the background is the wooden bridge that spanned the canal at Division Street in 1900 and would later find a new home in Dunnville. (Supplied photo)

With all the talk about the Forks Road Bridge replacement, it shouldn’t be surprising that bridge issues also faced Wellanders in the past. When the third canal was completed in 1887 bridge crossings were of the swing variety and made of wood with some iron fittings. Here, in Welland, swing bridges were found at Quaker Road, Main Street, and in Welland South, the Michigan Central Railway, Feeder Canal Lock, and third canal bridges.

At Main Street, the canal makes a sharp turn to the south after passing through the two aqueducts. The bridge that provided access to East and West Main streets needed to be replaced because it was too small for the growing ship traffic and a replacement at that location made it too difficult to navigate for shipping. Changing the location to Division and Bald streets was the solution for shipping but not for local merchants on Main Street. The federal government prevailed and the new bridge was placed one block away.

The wooden bridges of the day were constantly in need of repair and often were done during winter. The Division Street span had to be closed to horse carriage and pedestrian traffic leaving Wellanders with a pontoon structure that you had to step down to reach it and walk across while hoping not to slip on the walkway and fall into the canal.

Main Street got its bridge back by constructing a span that provided close to a 200 ft. space through which a ship could pass and make that turn going into or coming out of the two aqueducts. This span was called the Alexandria Bridge opening for business in 1903.

So what happened to the Division Street span? It was placed on Sullivan Island that separated the two aqueducts. Word had come down from Dunnville that it needed a replacement span where the Grand River and the Feeder Canal entrance met. The Division Street span fit the bill so it was loaded on a scow and made its way in 1911 up the Feeder Canal to its new home. No traffic had used the Feeder in years so to open the bridges over this channel was a real chore as the structure made the trip. This would be the last passage of a vessel on the venerable channel and would be filled in in 1928-29.

Next Column: When are we going to deal with the Cross Street pool as a national monument?

Meeting Calendar
Meetings are open to the public unless otherwise noted. Information is obtained from the applicable agency, board, committee, or commission and downloaded to this calendar as it becomes available. Information is subject to change. Please check back often for the most up-to-date information, including cancellations.

April
2
Council Meeting in Committee-of-the-Whole ≫
6:25 PM Tuesday Apr. 2 2019 –
Proposed or pending acquisition or disposition of land by the municipality or local board:
– Sale of city owned lands.

Personal matters about an identifiable individual, including municipal or local board employees:
– Non-union vacancy.
– City of Welland Heritage Advisory Committee