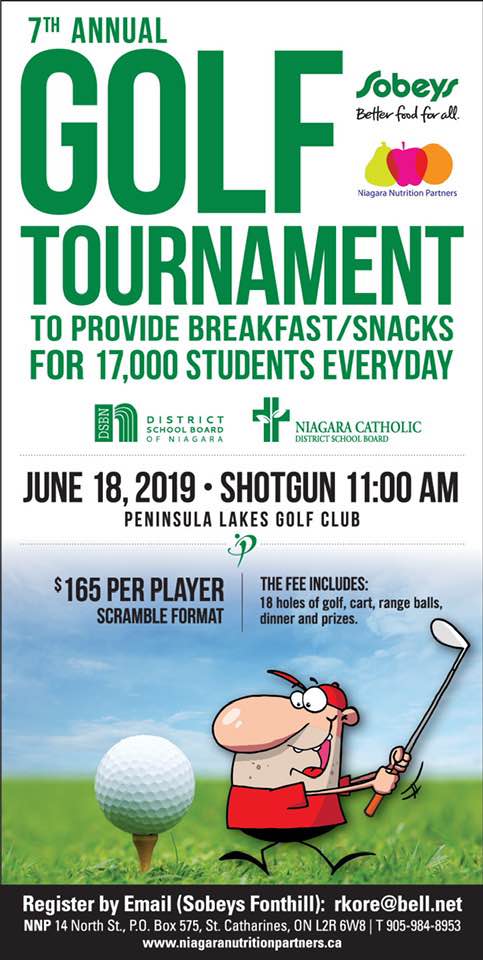 (Barky’s Billboard is a recurring feature on the blog)

WELLAND – The weekend of May 3rd to 5th will see close to 100 members of Development and Peace from across Ontario descend on Welland’s Niagara College campus for their annual Regional Assembly.

In addition to working sessions over the three days, there will be opportunities for people to socialize and pray together. A dinner at Notre Dame College School on Saturday night and Mass as St Kevin Church Sunday morning are planned as part of the weekend.

The Ontario Regional Assembly coincides with regional assemblies in Quebec, the Maritimes, Newfoundland and the Western Provinces. It is hoped that there will be an opportunity at some point to link electronically with the other gatherings being held across the country.

The Ontario Assembly rotates around the province each year. The last time it was in the Niagara Region was 12 years ago when it was held at the Niagara-on-the-Lake campus of Niagara College.

Since the event is here in the Niagara Region this year, the local contingent has a full complement of 4 voting delegates and approximately 12 additional observers registered to attend.

(Frank Fohr is South Western representative on the National Council of Development and Peace.) 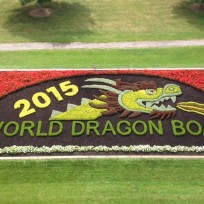 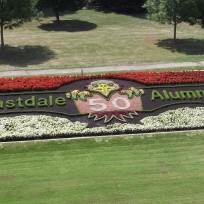 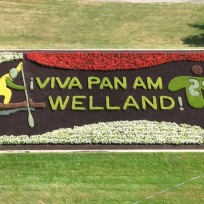 WELLAND – Themes have been selected for the city’s floral display beds.

These outdoor works of floral art year after year can be counted on to show off the creativity and design talent of the City of Welland parks division horticulture crew.

This year’s themes are:

In e-mail correspondence, landscape technician Craig Danys said only one bed request was received this year, that from St. David’s Anglican Church. But he said “a few” have already been received for 2020.

The theme chosen this year at Triangle Park follows the trend of having a child friendly, animal design for the bed. In previous years there have been a turtle and a snake so Danys decided on a lizard for this year.

The spider and fly are an original design by Dave Steven.

“It is really interesting and should be a real eye-catcher with some bright colors in both insects and webbing,” according to Danys.

A variety of plant material is used in the displays to provide rich colour and texture. Examples are alternanthera, santolina, begonia, duranta and helichrysum. The hues are yellows, different greens, reds to burgundy, silver and white and blue.

By tradition, the floral display beds receive annual acclaim from passersby who admire the eye-catching design and array of colour.

They have been praised in letters to the editor of the  daily newspaper written by local residents, but also visitors to the city who are taken with their attractiveness.

Work on the display beds will begin after removal of the tulip bulbs, around mid to late May.

Meeting Calendar
Meetings are open to the public unless otherwise noted. Information is obtained from the applicable agency, board, committee, or commission and downloaded to this calendar as it becomes available. Information is subject to change. Please check back often for the most up-to-date information, including cancellations. 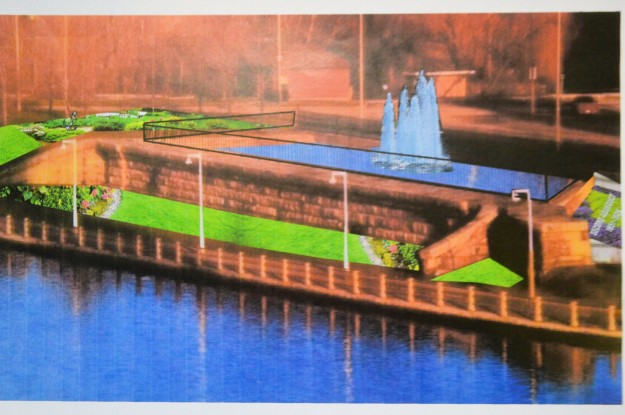 Since being declared as a site to be developed as a national monument by the MacLaren Report back in 1984, many efforts have been made to pursue this goal.

For example, In 1990 city council endorsed the idea and when the Welland Recreational Canal Corporation (WRCC) came into being after 2005, they endorsed the idea several times. Two years ago we thought that city council had supported the designation of the pool but the city clerk informed me that a last minute agreement was reached not to pursue the idea.

Our MP, Vance Badawey, last year said that he would support the effort. Since then a list of 25 prominent citizens has endorsed the proposal for the pool explained below:

The accompanying picture shows the structure in the form of a reflecting pool enclosed with an iron fence and a shower of water cascading at its centre. This project would recognize the 75 years it served as an aqueduct and the nearly 40 years as a swimming pool. In winter because it is only 18 inches deep, it would serve as a skating rink that would replace the small ice pad in front of the civic centre. This would recognize the winter days when people skated on the old canals and river. No hockey would be allowed. Appropriate historic signage would be placed on site. (Inscription in white at far right says: Second Aqueduct 1851-1926)

So what is your opinion? If you like the idea, tell your city councillor about it and tell the folks to hurry up the proposal now languishing in the heritage committee!
We’ll deal with the Feeder Lock Park issue another time. 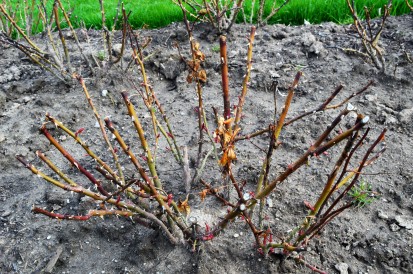 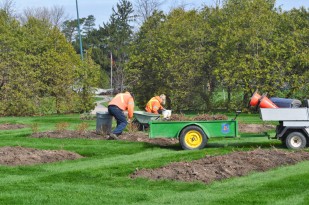 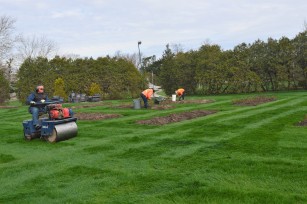 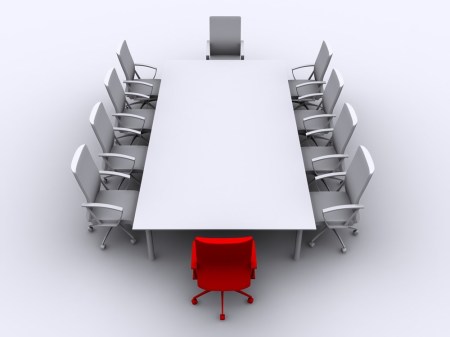 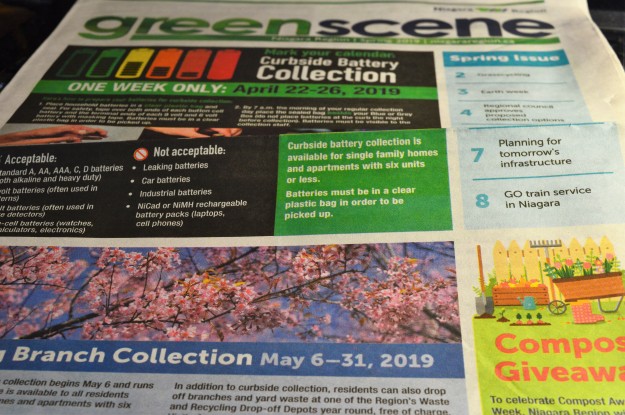 Region’s environmental insert deserves to be a keeper, not a throw away. (Photo by Joe Barkovich)

WELLAND – A lot of the inserts that come with the local newspaper go out with the trash. Oops, you’re not supposed to do that any more, so they go out in the grey box for recycling instead.
But not this one, courtesy Niagara Region. This insert, Green Scene, which arrived earlier this week is a keeper. It deserves to be.
The eight-page section is rich in environmental information, graphics, photos and stuff that’s great to know. It’s visually appealing, which is important, and an easy read.
The cover caught my eye with great graphics about curbside battery collection, annual spring branch collection and compost giveaway.
The inside is a treasure chest of riches like: Earth Week activities, bicycle recycling, booking online for large item collection, Humberstone landfill expansion and even an update on GO Train Service, among others.
It arrived with a slew of other inserts in this week’s newspaper, which is unfortunate. It might have been missed by many readers, especially those who discard the inserts “en masse” without even bothering to see what they’re about. In this case, what a waste! 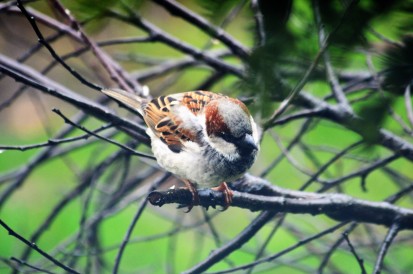 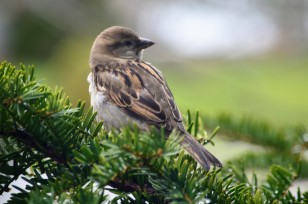 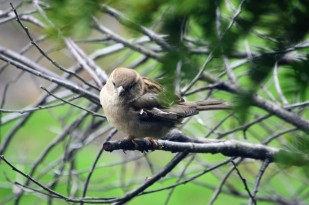 Shot these through the window of our living room. A bird feeder below acts like a magnet some days. (Photos by Joe Barkovich)

(Barky’s Billboard is a recurring feature on the blog)