Cab area of the Lafrance pumper stored at former Central fire house. It was on display at Saturday’s Cultural Days open house hosted by the Central Station Education Initiative, a volunteer group that is trying to make the old fire station a public heritage building with an emphasis on local emergency services heritage. Love the staircase visible in the background! (Photos by Joe Barkovich)

John Mastroianni, centre, a member of the Central Station Education Initiative is shown in discussion with a visitor to Saturday’s open house. Seated at left is Blair Campbell.

Front view of the Lafrance pumper, a classic from 1957.

Children visiting during Saturday’s open house could colour this image of the former downtown fire house, or take it home with them and do it there. A great idea for teaching heritage.

Committee member Wayne Campbell shows what it was like sliding down the fire pole. Well, kind of.

A small part of the highly detailed map of the city, still hanging on a wall in the building. The year 2020 marks the iconic hall’s 100th anniversary. 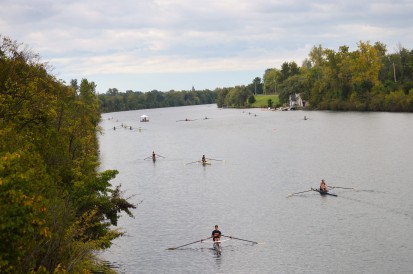 View from the Woodlawn bridge, overlooking starting line area at Saturday’s Head of the Welland-Five Bridges Fall Classic. Boats are waiting for their start times, starting line was near Notre Dame Rowing Club boat house. In the distance is the steeple of St. Mary’s Church. (Photos by Joe Barkovich)

A view of the Second Welland Canal Aqueduct, centre right; it’s a remnant of early canal heritage here in the city.

Main Street Bridge stands sentry-like as boats go by, relishing its role on the storied course and waterway.

Merritt Park and the amphitheatre/ stage, partially seen at left, add to the beauty along the race course. When leaves are in ful fall colour, as in some years, the view can be breathtaking.

Not all boats are used for racing – this canoe became a canvas as one of the works of art in Welland’s Canoe Art Project. It’s located between Main Street Bridge and Merritt Park.

Main Street bridge appears to be resting on the Division Street crossing in this photo from the concert stage in Merritt Park during Saturday’s Five Bridges Fall Classic. Rowers passed beneath five bridges along the waterway in what is by tradition a beautiful event to watch. More photos to follow. (Photo by Joe Barkovich)

Claire Masswohl, left, of the Central Station Education Initiative and Rose Dzugan of the city’s Heritage Advisory Committee, check out the interior of a 1957 LaFrance quad pumper. They were at the Culture Days open house at former Central Fire Hall, sponsored Saturday afternoon by the Education Initiative. Visitors streamed in and out of the former  fire station for tours, informative chats with committee members and encounters with firefighting memorabilia. More photos to follow. (Photo by Joe Barkovich)

(Barky’s Billboard is a recurring feature on the blog. Supplied graphic.)

Meetings are open to the public unless otherwise noted. Information is obtained from the applicable agency, board, committee, or commission and downloaded to this calendar as it becomes available. Information is subject to change. Please check back often for the most up-to-date information, including cancellations.

The visually-rich Five Bridges Fall Classic is a joy to watch from many vantage points along the course. (File photos/Joe Barkovich)

The race course begins just south of the Thorold Road boat launch (end of Thorold Road) with a naturally scenic 1.5 km stretch of open water running beside Merritt Island and over the Aqueduct to the Civic Square. It then proceeds under five bridges travelling 3.7 km south through the heart of the city to the finish line on the North Course of the Welland International Flatwater Centre.

The waterway then immediately enters the North Course of the Welland International Flatwater Centre and competitors have approximately 1.2 km remaining to make their move. 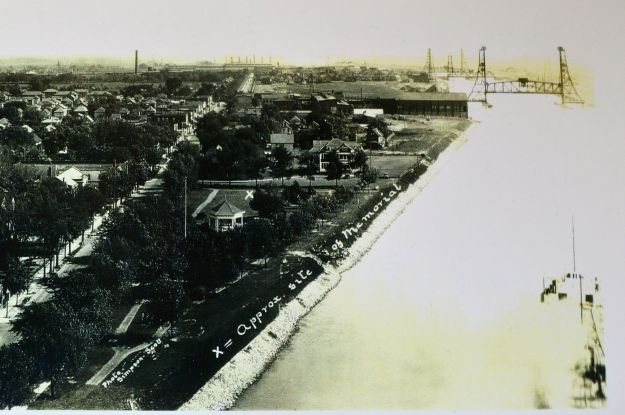 ‘X’ marks the spot of the intended site for the Welland-Crowland War Memorial in Merritt Park. Nearby is the park bandshell and to the south, the Welland Club. (Supplied photo)

The recent announcement about moving a Workers Monument from its original location, Dain Avenue, to Merritt Park, led me to a photo in my file of another monument that was to be destined for this location.

When Merritt Park was built over a garbage-infested body of water called McCarthy’s Pond, a beautiful bandshell was erected near the centre. A cannon was placed on the site, near the Welland Club, but was later removed in favour of the Branch 4, Royal Canada Legion building located at the time on East Main Street.

With the end of the First World War, local politicians from both Welland and Crowland Township felt a monument should be built celebrating the end of the war to end all wars as it was known and honouring those who gave up their lives in it.

Funding was very slow in coming and was further hindered by the onset of the Great Depression. The design was finally complete and the location that was initially selected was Merritt Park. Here in this photo taken from the Main Street bridge, circa 1935, the location is marked with an “X”.

However, the decision-makers of the day for various reasons felt recently-completed Chippawa Park would be more suitable. The monument, the Welland-Crowland War Memorial, was completed there and dedicated in 1939, just after the Second World War began.

Now, moving back to the Workers Monument at Dain Avenue on the former Lakeside Steel (Page-Hersey) site. Although arrangements have been made and supported by city council to move it to Merritt Park, a better location may have been Memorial Park, not far from a cenotaph paying tribute to those from Crowland Township who gave their lives in the two world wars.

Eli Turonski, a parks board member and long-time Crowland booster back in the day, wanted Crowland to have a park that would compete with Chippawa Park in Welland. That was why Memorial Park had the first swimming pool separate from Cross Street pool. It was in the shape of a figure eight, complete with underwater lighting for night swimming, one-metre and three-metre diving boards and a concession stand to serve refreshments.

But changes occurred over the years particularly with construction of the canal bypass and now the park is the site of baseball diamonds and other recreation features. Placing the Workers Monument here would have made more sense, in my opinion, because most of the industries were situated in Crowland Township and the majority of workers who were employed there were from the township.

Maybe next time this park could be looked upon as a site where appropriate monuments might be placed.

Next column: Oh, Henry And It’s Not The Candy Bar!

Dzugan welcomes guests and talks about the significance of heritage designations.

A look down Parkway as it is today, still a highly desirable residential neighbourhood.

WELLAND – The heritage plaque unveiling Saturday morning at the Brick Archways, Parkway and Niagara Street, was like a homecoming for Mayor Frank Campion.

Campion grew up on Parkway, he said to a small gathering. It had assembled for the opening of a heritage designation tripleheader: in addition to the Brick Archways, also being designated were the Welland Canal Memorial Monument, Merritt Park and the Canal Construction mural, on an exterior wall of the Welland Museum, 140 King St.

The archways, constructed in 1913, were part of a gated entranceway to Parkway Heights, a new subdivision built as Welland was experiencing an industrial boom and rapid growth thanks to the arrival of industries like Plymouth Cordage, Electric Steel and Metals, Page Hersey Iron Tubes and others. The subdivision became home to prominent industrialists, business owners, merchants and professional people.

The mayor had fun with the “elite subdivision” reference to Parkway Heights in the printed program.

He said he grew up on the “elite street”, with all its unique people.

“And then there were the Campions.”

The archways became important to him in childhood days.

Campion recalled being walked to the corner of Parkway and Niagara Street by his mother. As a kid, he attended nearby St. Kevin School.

Going to school was easy, he said, with his mom there to send him off. But coming home was a tad more challenging.

He was afraid he’d get lost, the mayor said.

But when the archways came into view, he knew he was on the right track home.

That was “about 57 years ago”, Campion reminisced. And just as she was then, his mom was there for Saturday’s ceremony at the corner of Parkway and Niagara Street, still graced by those landmark brick archways.

The Welland Canal Memorial Monument in Merritt Park “commemorates the people from Canada and around the world who came to the Niagara Peninsula to build the Welland Canal,” according to background info in the commemorative program. It was unveiled September 27, 2001. 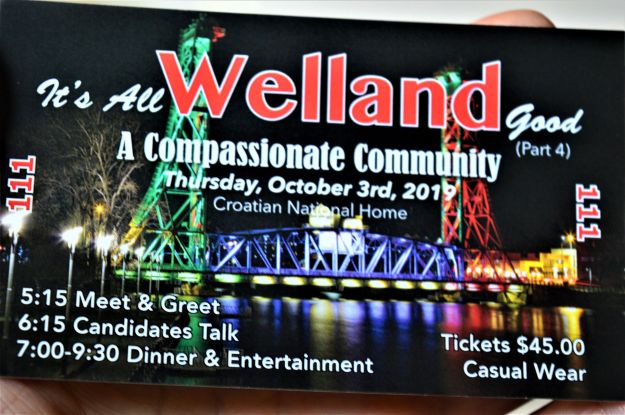 (Barky’s Billboard is a recurring feature on the blog.)